One clear thing about art is how it expands our capacity to see. To understand. To delight. The exhibits I’ve seen at Crystal Bridges Museum of Art in the past two days do this.

One exhibit in particular does all of the this.

State of Art 2020. A team from the museum visited artist studios across the country, eventually choosing 61 artists to include in this exhibition.

I was struck with this photograph.

Art Miller’s AT&T Cellular Tower, First Church of the Nazarene, Springdale, Arkansas got my attention. Enough so that we decided to drive over to Springdale and see this for ourselves.

Twenty-five minutes later… we were in Springdale, gazing up.

Miller’s photograph is taken from the rear of the church, mine from the front. 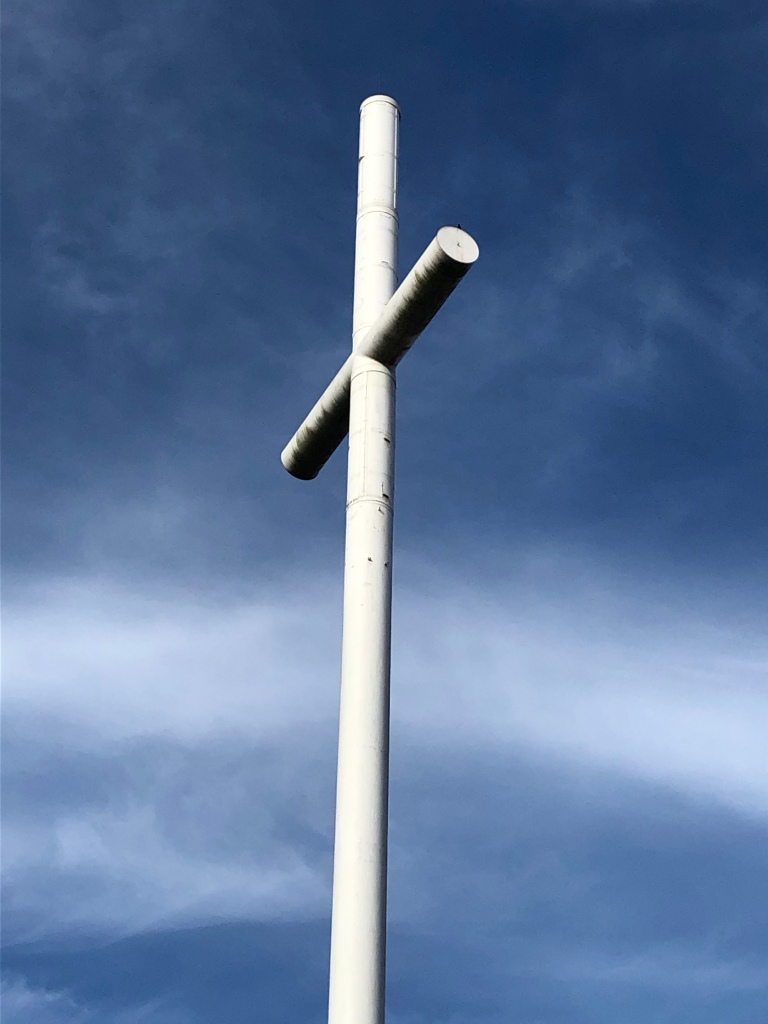 The point of our trek to Springdale was to see the original image, a cross that doubles as a cell tower.

Commentary by Miller about his image: Rising high into the clear blue sky above the American heartland, these larger-than-life Christian crosses serve as beacons to those in need of spiritual guidance. Or perhaps, cellular service.

Last night we found a Saturday evening service at All Saints Episcopal Church. This church has a more traditional cross tower. 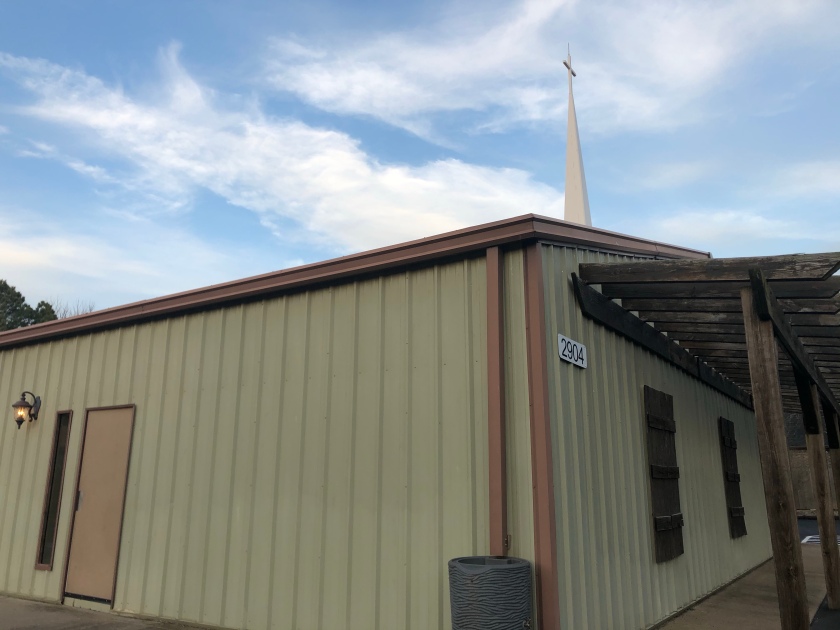 “Be glad, you righteous, and rejoice in the Lord; shout for joy, all who are true of heart.” Psalm 32:12

This morning, as I prepared to leave for Atlanta’s Hartsfield-Jackson airport, lyrics of a song came to mind – “what does it mean to travel…”. I quickly Googled that line and found all the lyrics to Mary Chapin Carpenter’s song of those same words.

You walked halfway down Manhattan
Till you met the Brooklyn Bridge
And in a two A.M.transmission
From a high wire act position
How the skyline behind you glistened
As if someone pulled a switch

From departure to arrival
What does it mean to travel

Yes, I’m in that chair in the sky once again. This will be trip number 410. But who’s counting? Oh right, me.

I’m headed to Crystal Bridges Museum in Bentonville, Arkansas. Located in the far northwest corner of the state, and surrounded by national and state forests and parks, this is a gorgeous place for a short retreat these first few days of Lent.

What does it mean to travel for me is summed up beautifully by the words of Mary Chapin Carpenter.

What does it say about waiting – longing – for something, when certain criteria first have to be met? I’m talking about snow. I crave snowfall. That is, when convenient, and when there will be no disruptions to my plans.

Then there is the waiting for the snow. No disruptions expected, so where are the falling snowflakes?

Since moving to Georgia I’ve taken delight in seeing and experiencing snow. I grew up with snow and for almost 40 years I lived in non-snow climes. Now that I live in the mountains I welcome snowfall. Just as long as I am not inconvenienced.

You’d think having retired and moved to the mountains, I would relish being snowed in. Well, quite the opposite it turns out. If I have just a hint that I might not “get out” because I have to be somewhere, I completely miss the snow experience.

Yesterday I had to be somewhere an hour’s drive from home. I was reasonably certain I could get back home before the white stuff arrived. I got back by the predicted noon snow arrival, but then I was frustrated by having to wait an hour or so for the snow show. What is it about my timetable?

At last the big show began!

May Sarton talks about snow silence in her poem, December Moon. “…so calm, untouched and white, snow silence fills my head.” I know that hushed silence. It stops me; it quiets me. When time dictates that I have nowhere to be, that is.

Mary Oliver writes, “snow was falling so much like stars filing the dark trees, so that one could imagine its reason for being was nothing more than prettiness.”

Of course this kind of prettiness and silence is only for a time. While fleeting, my snow craving is satisfied, my soul is quieted. Hopefully I’m learning lessons about patience.

It’s time to get back in the air. After all, it’s been three and one-half weeks. That fact actually surprises me. So soon? Of course so soon!

This a quick trip, just three days. I’m in need of some time with my Texas family. A place I know I’ll be wrapped in love. It’s fitting that I’m flying into LUV on Valentine’s Day.

Seated in my “fancy” chair in the sky, I would love to look out the window today and see a cloud heart!

During that first flying trip Millie took me to Rookwood Pottery Company. Founded in the late 1800’s, it had a long history of creating beautiful ceramics. The piece I bought that day became a soap dish for my bathroom. Now thirty-five years later it still reminds me of the beauty of Maine, and even more, the beauty I found in the love I shared with Millie. Each time I reach for the soap, I’m reminded of her.

This day I’ve seen hearts in a soap dish, in Starbucks, the doctor’s office, billboards along the highway, and at the airport.

I’ve had joyous dueling valentine photo texts. I’ve been card-serenaded, and all four grandchildren texted thanks for Starbucks valentines. Imagine that. Just so precious.

Today I’ve noticed more smiles than usual as I’ve heard “Happy Valentine’s Day uttered repeatedly. I’ve smiled in return. I know this day is viewed as a commercial opportunity, and so it is. Yet, the sentiment of love seen and heard throughout the day can’t be just about a means to make money. I’ve seen for myself it’s more surely about affection, about love.

Now that I’m sharing trip driving, I am able to take photographs without pulling over, or worse, snapping as I drive. It’s very freeing! Freeing primarily for the additional driver who was troubled by my photo habit while driving.

I did take one quick pic yesterday. I know. I know. 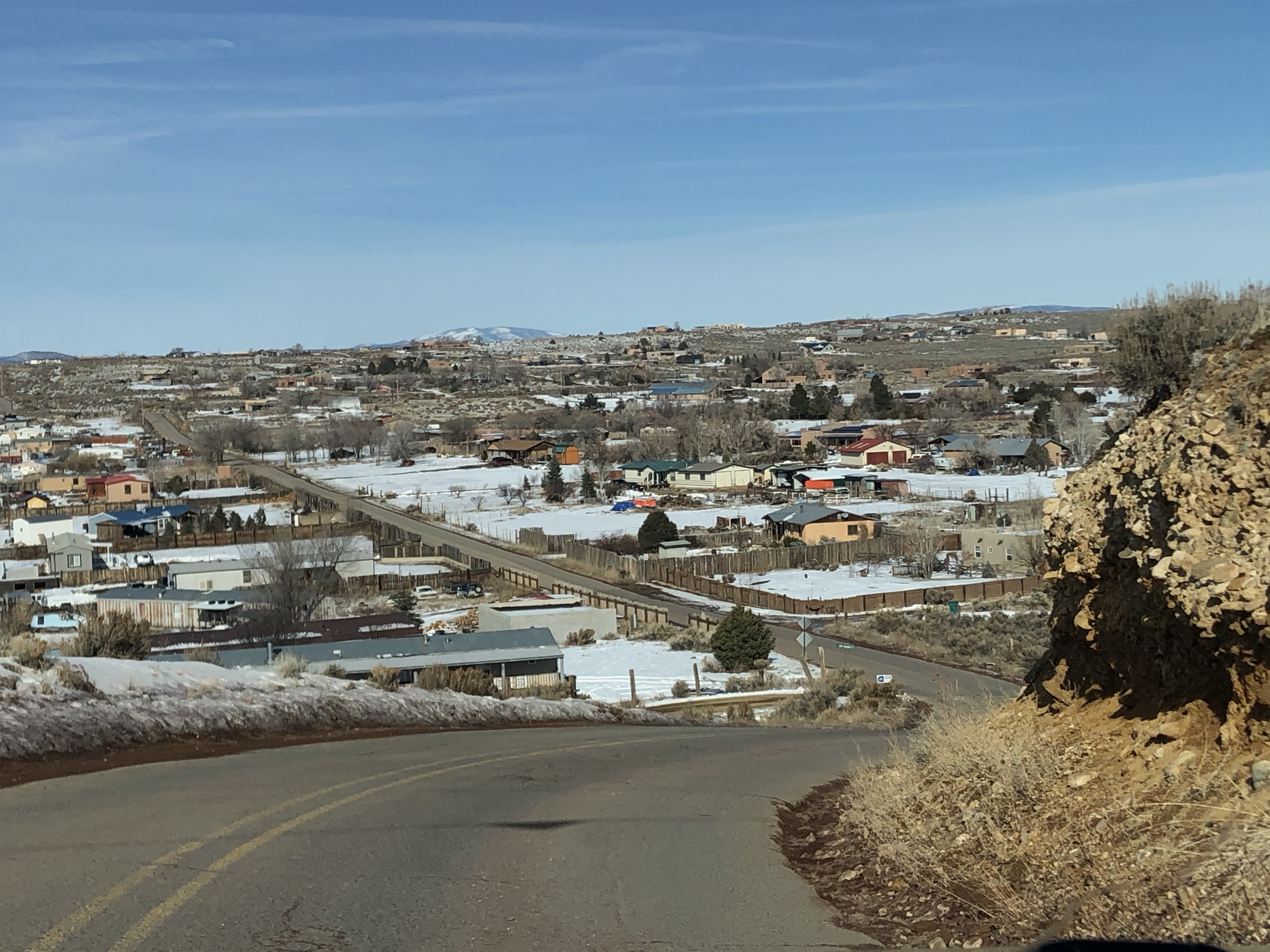 Today I took my unfamiliar seat as a passenger and proceeded to snap with abandon.

The windshield was covered in ice-art.

It was hard to leave this morning. It always is. We stopped at Coffee Apothecary of course. While enjoying my cappuccino Beth suggested we come in July for my birthday. Yes!!

I am at my best when I know I have trips ahead.

The morning’s drive south to Albuquerque was glorious. Thanks to the recent snowfall, the hills near and far were dazzling. I love this part of the country so much.

This is my healing tree. 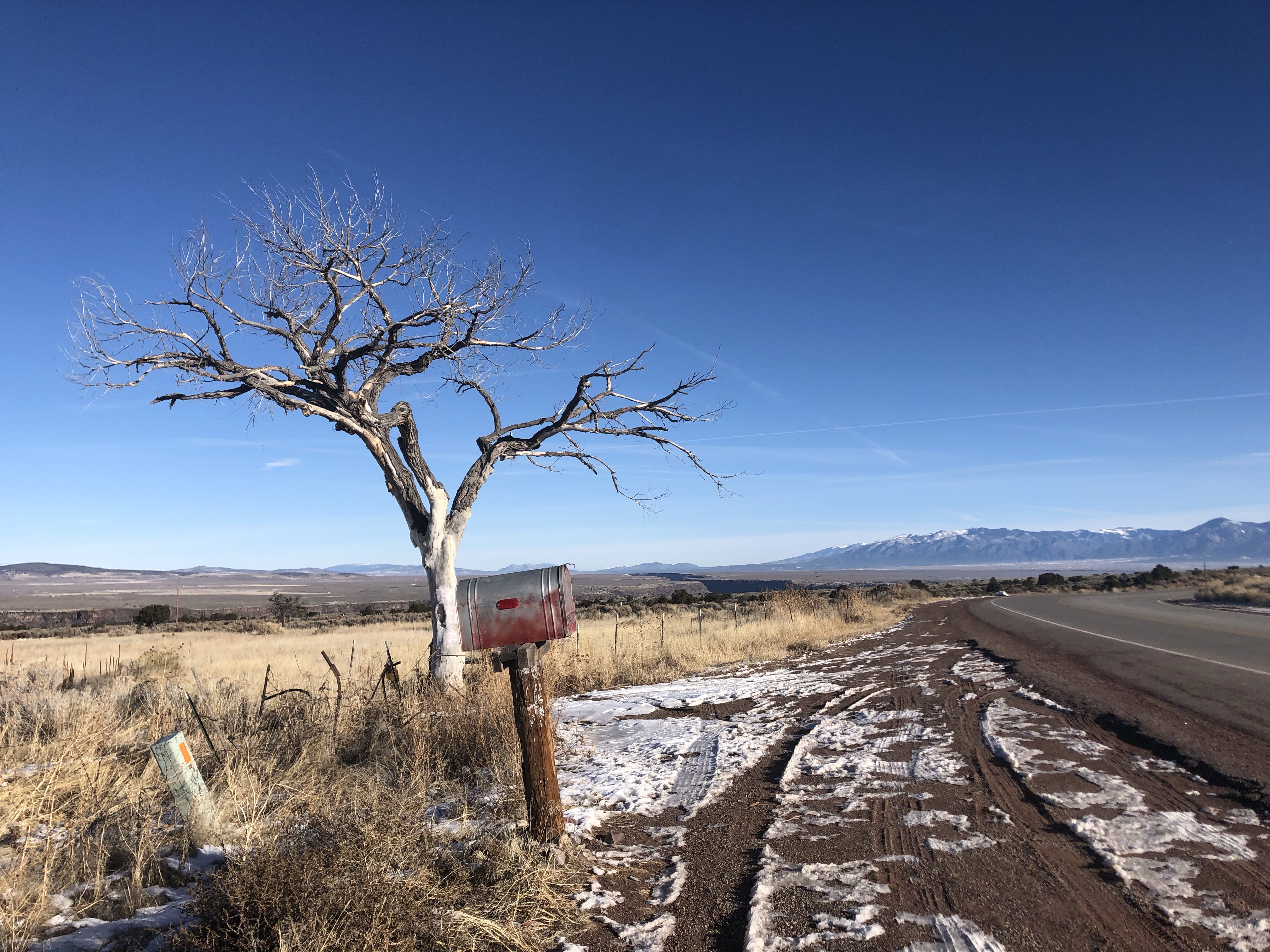 Vistas to feed the soul.

Camel Rock with a blanket of snow. 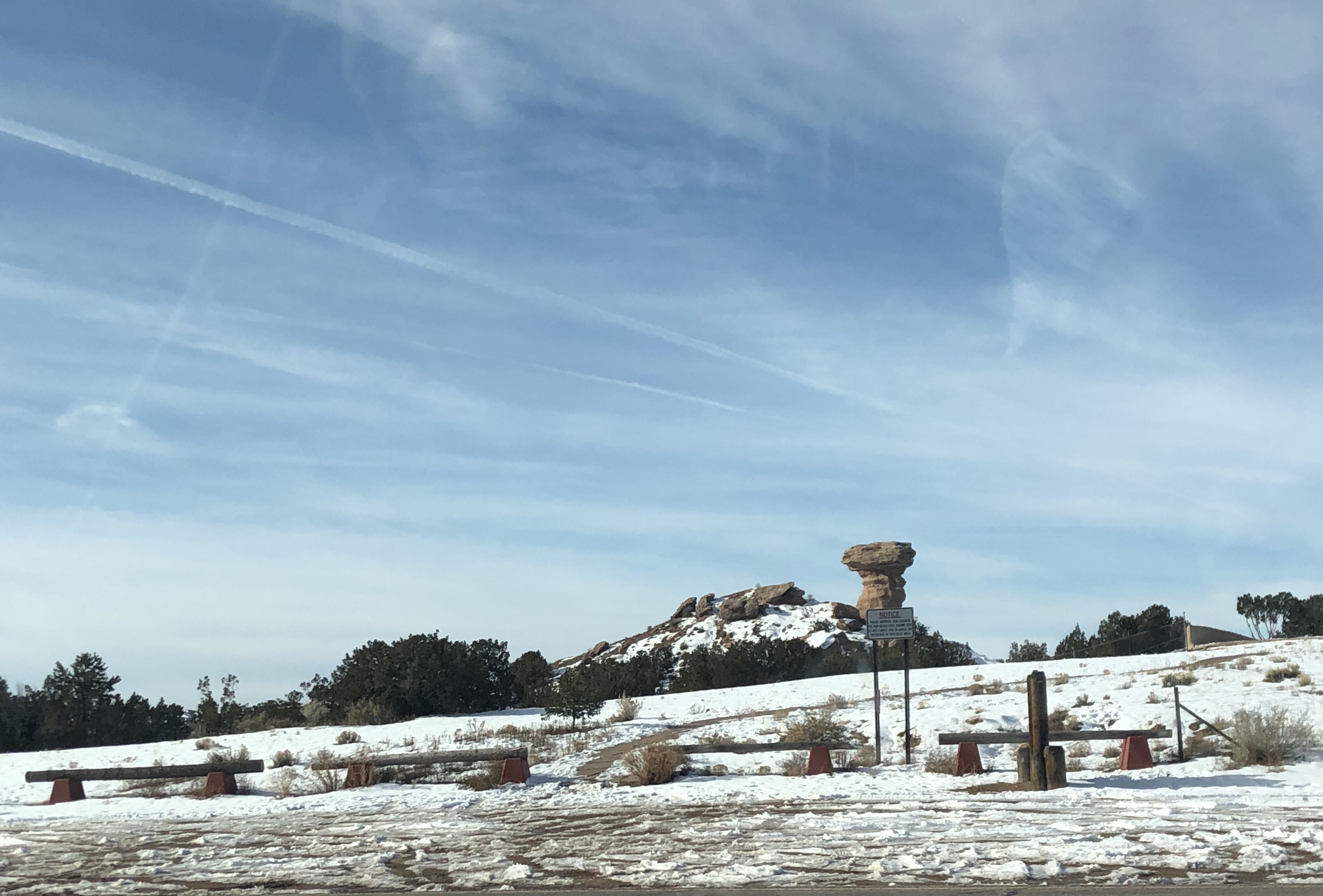 I’m blessed with the love of travel, and the ability and means to fly off to places I love.

I’m delighted to have you all along.

But as is our wandering way, we ended up at only two girl churches – La Inmaculada Concepcion Church, and Church of the Immaculate Conception. It was a Virgin Mary kind of day.

We prayed from Daily Prayer for all Seasons. 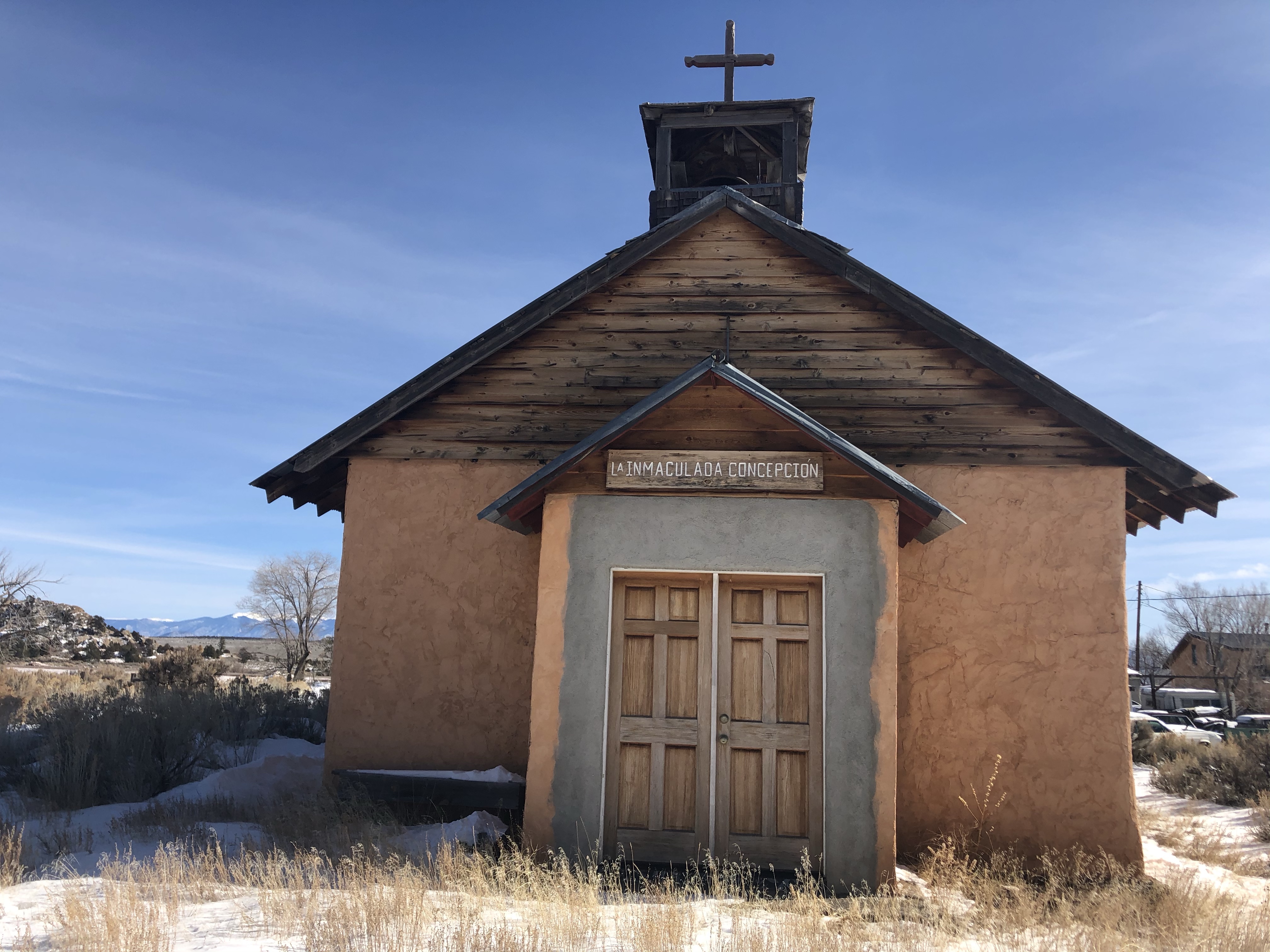 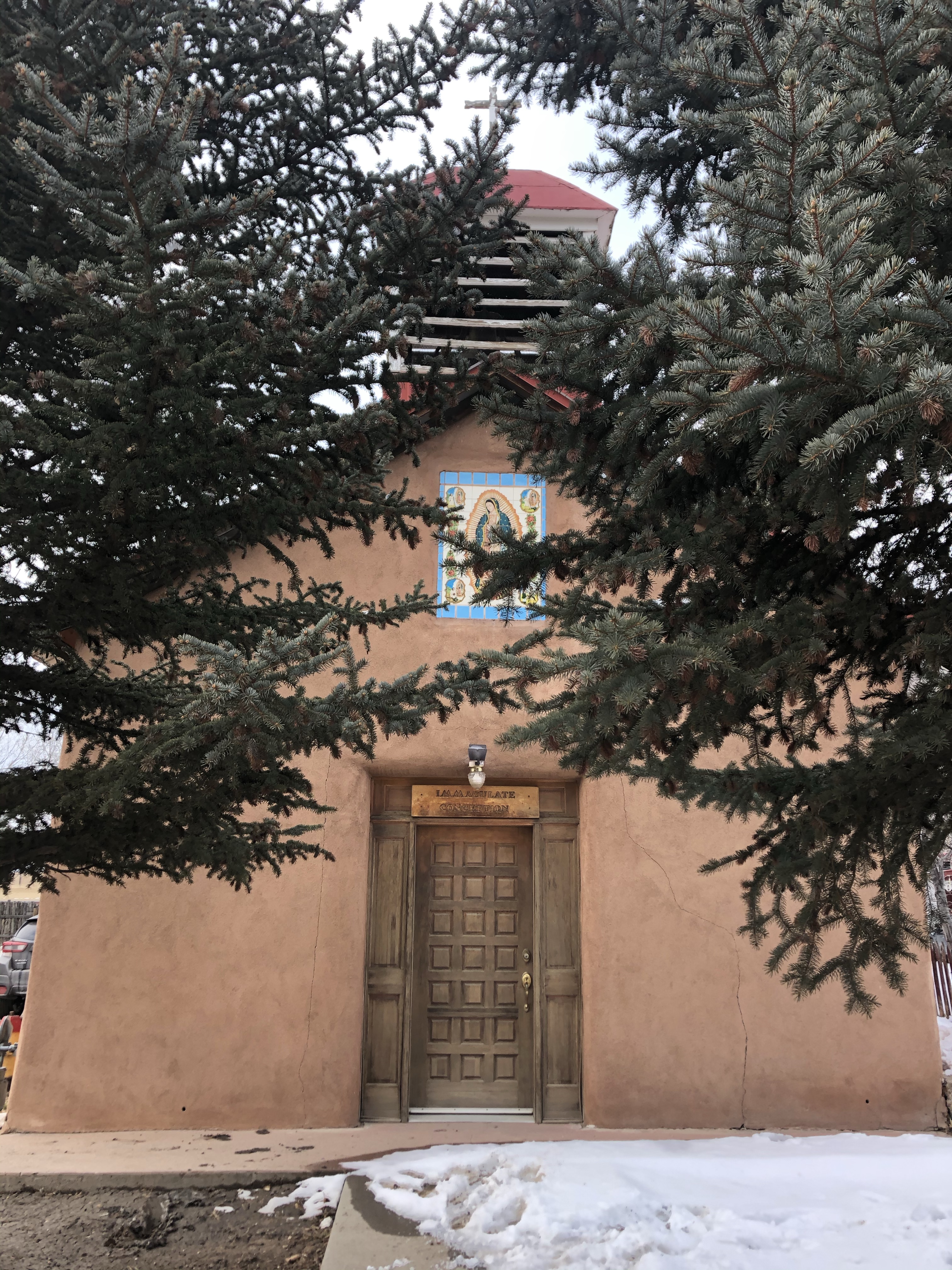 In between we visited the Rio Grande Gorge,

and took in a movie. Fantastic Fungi. This wrapped up our personal movie festival, having also seen The Farewell, Little Women, and Blinded by the Light.

We ended this Sabbath Day with a New Mexico sunset.

This morning I’m thinking about resonance. 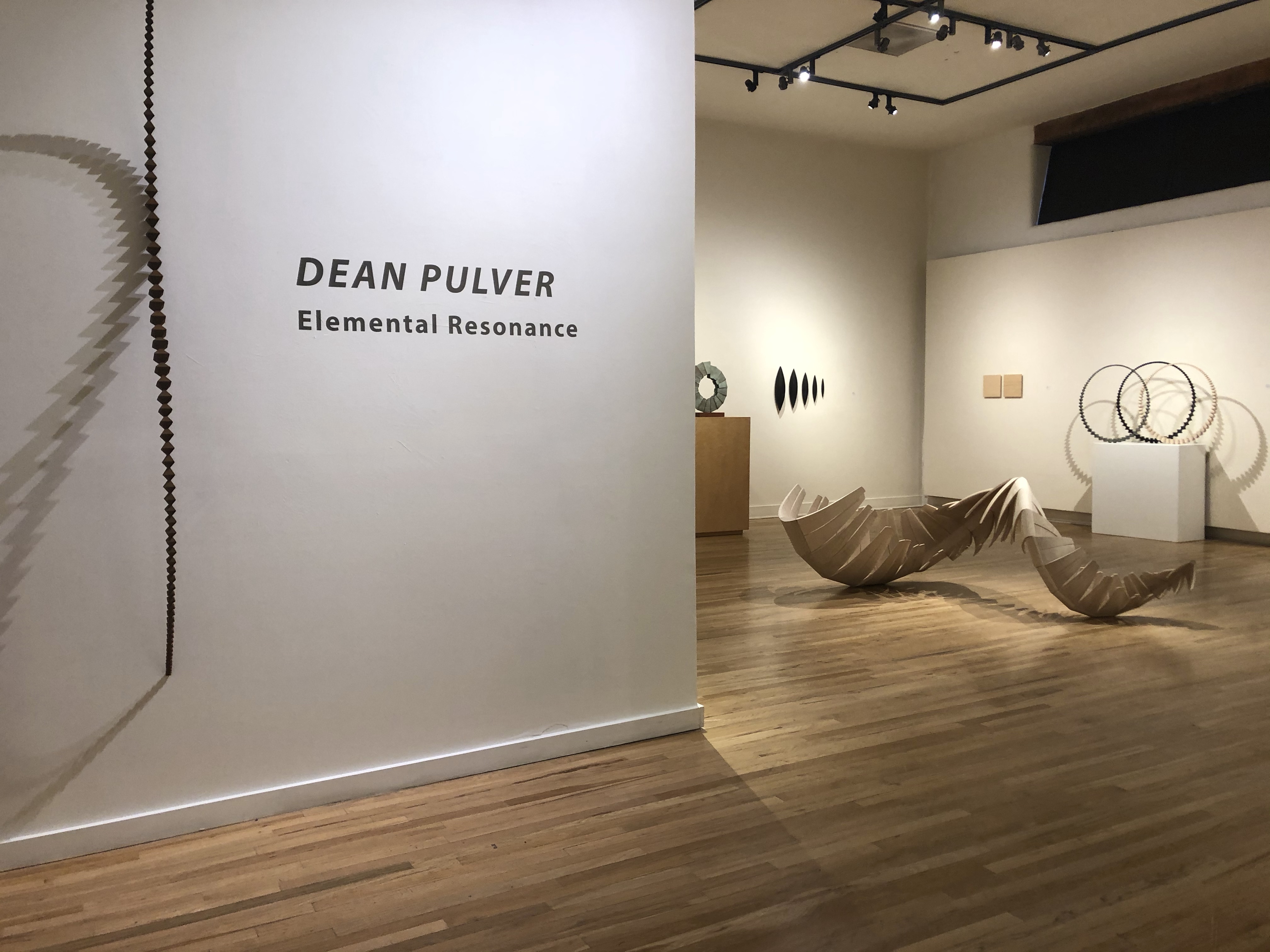 I looked up the definition of resonance and found a detailed physics explanation. I also found this:

“People who are not very good at singing sound much better while singing in the shower because the pure notes emitted are resonated in the shower cubicle. The bathroom is enclosed space and sometimes small; as you sing the sound waves hit the walls more frequently causing the wall to vibrate since the walls are parallel to each other.”

I don’t imagine Dean was thinking about singing in the shower as he created his sculpture pieces. But after experiencing the pieces myself, it feels like sound-creating to me.

Though fixed and stationary, there is movement. The shadows cast from the hanging sculptures move in shades and in texture. 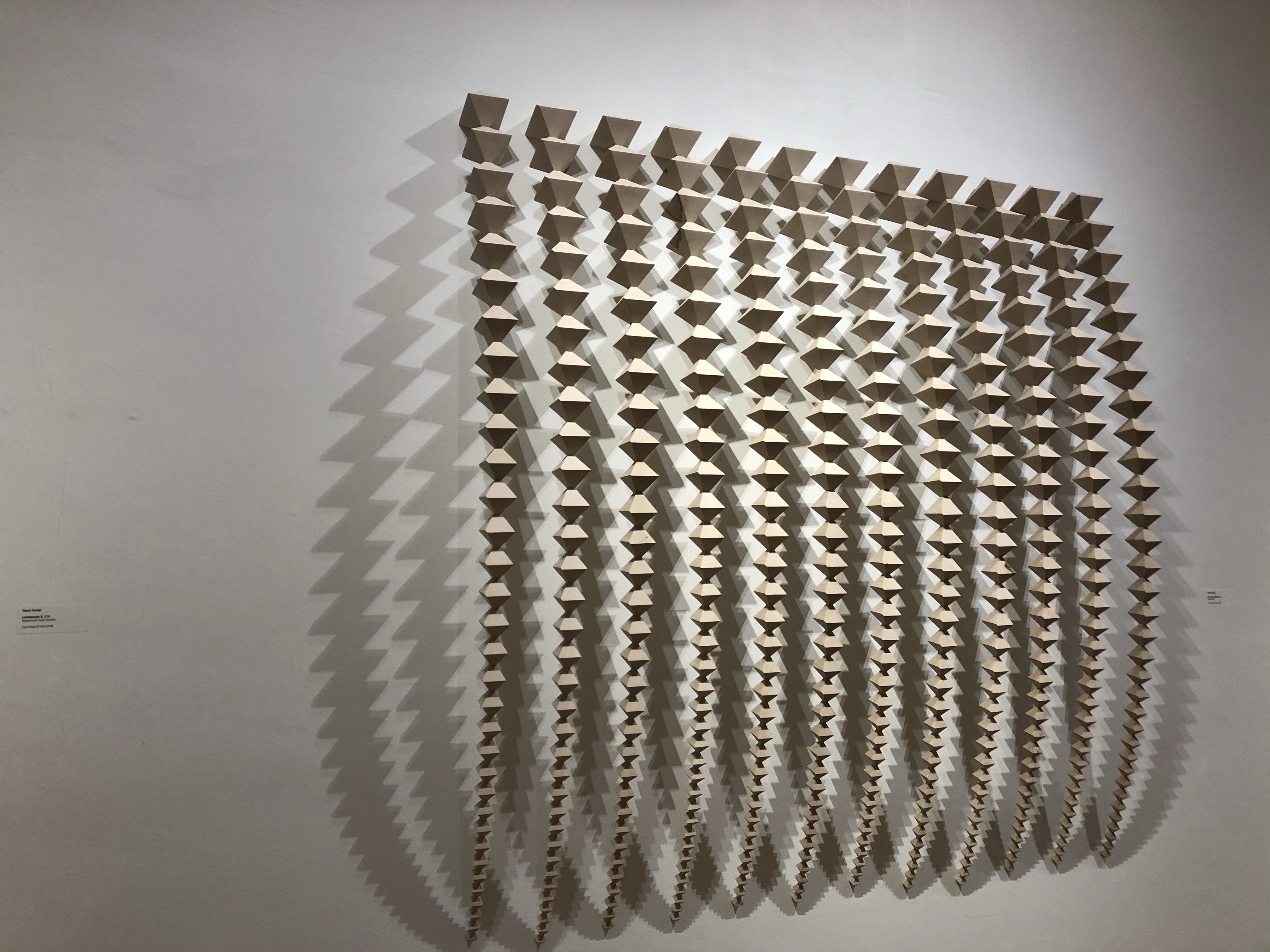 I happen to know Dean. He’s the husband of a long time friend. She’s a ceramicist and we have visited their home and art studios a number of times.

It is a privilege to have seen some of the works early in their creation.

The pieces last night filled me with a sense of wonder. Of delight. It’s clear they resonated with me. 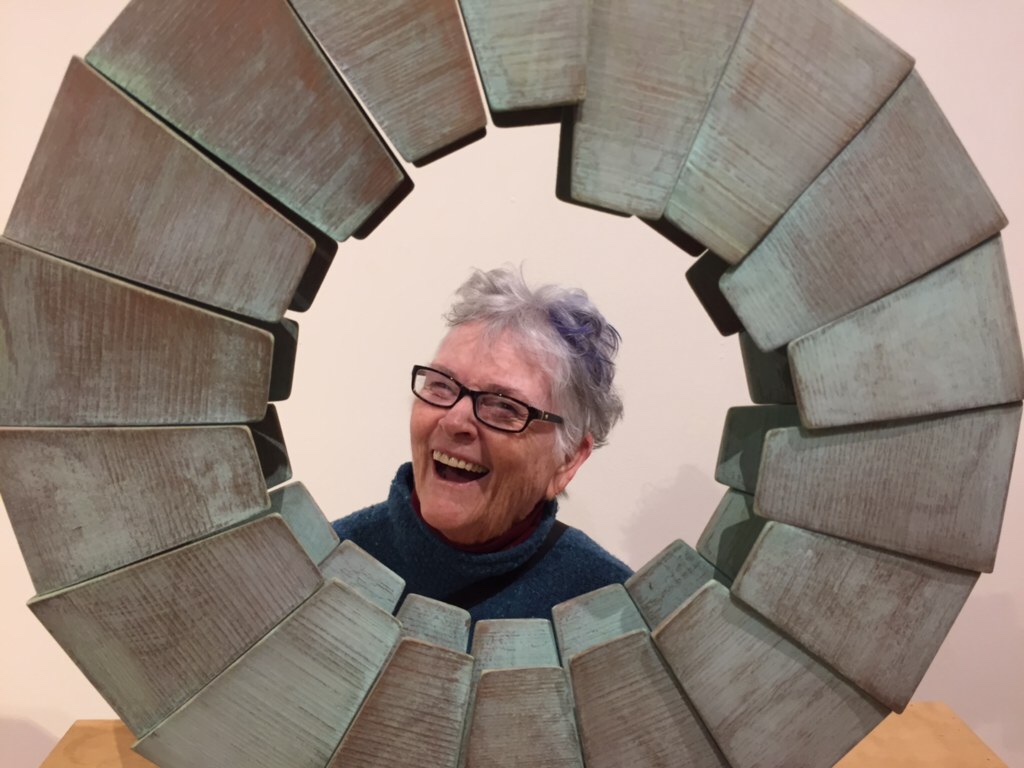 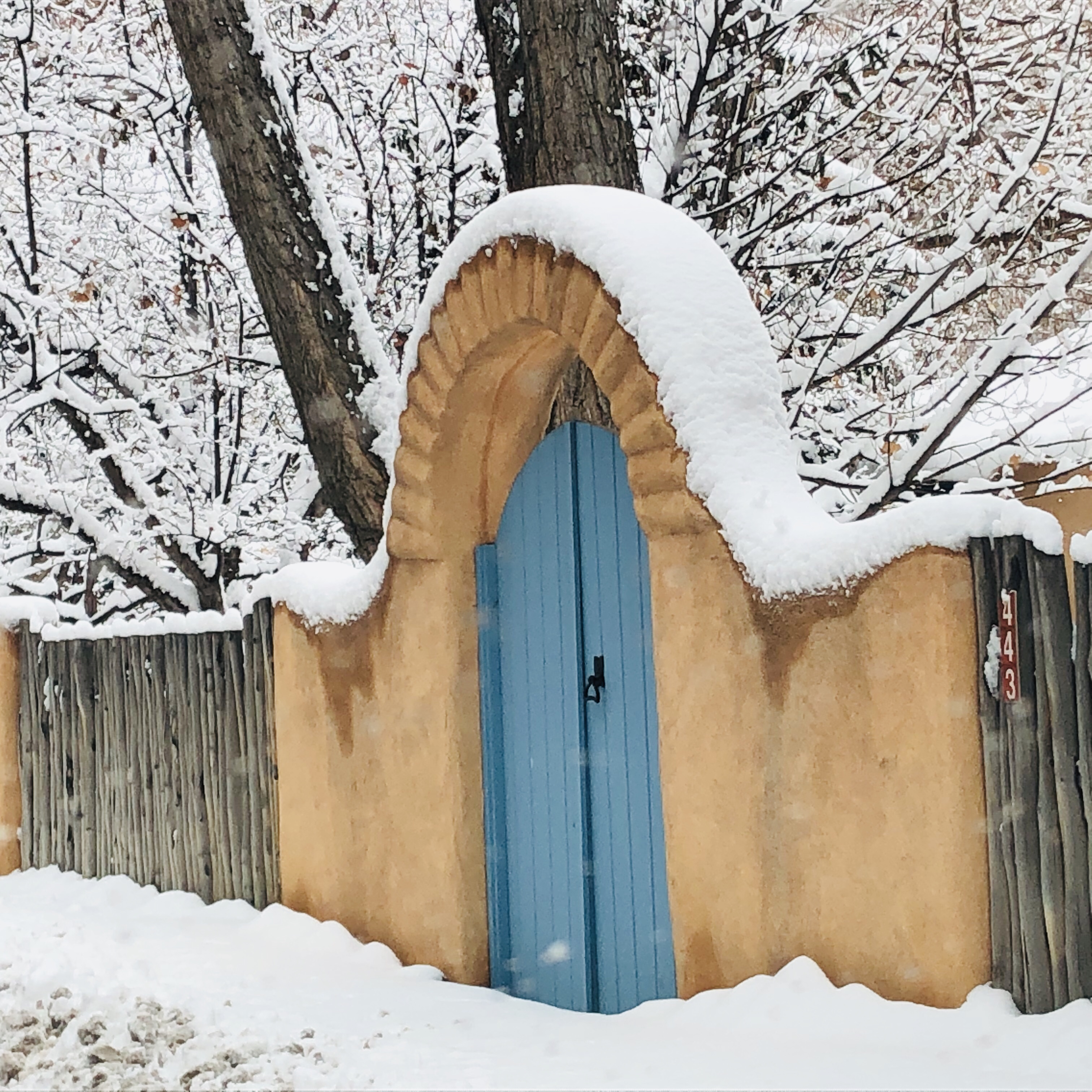 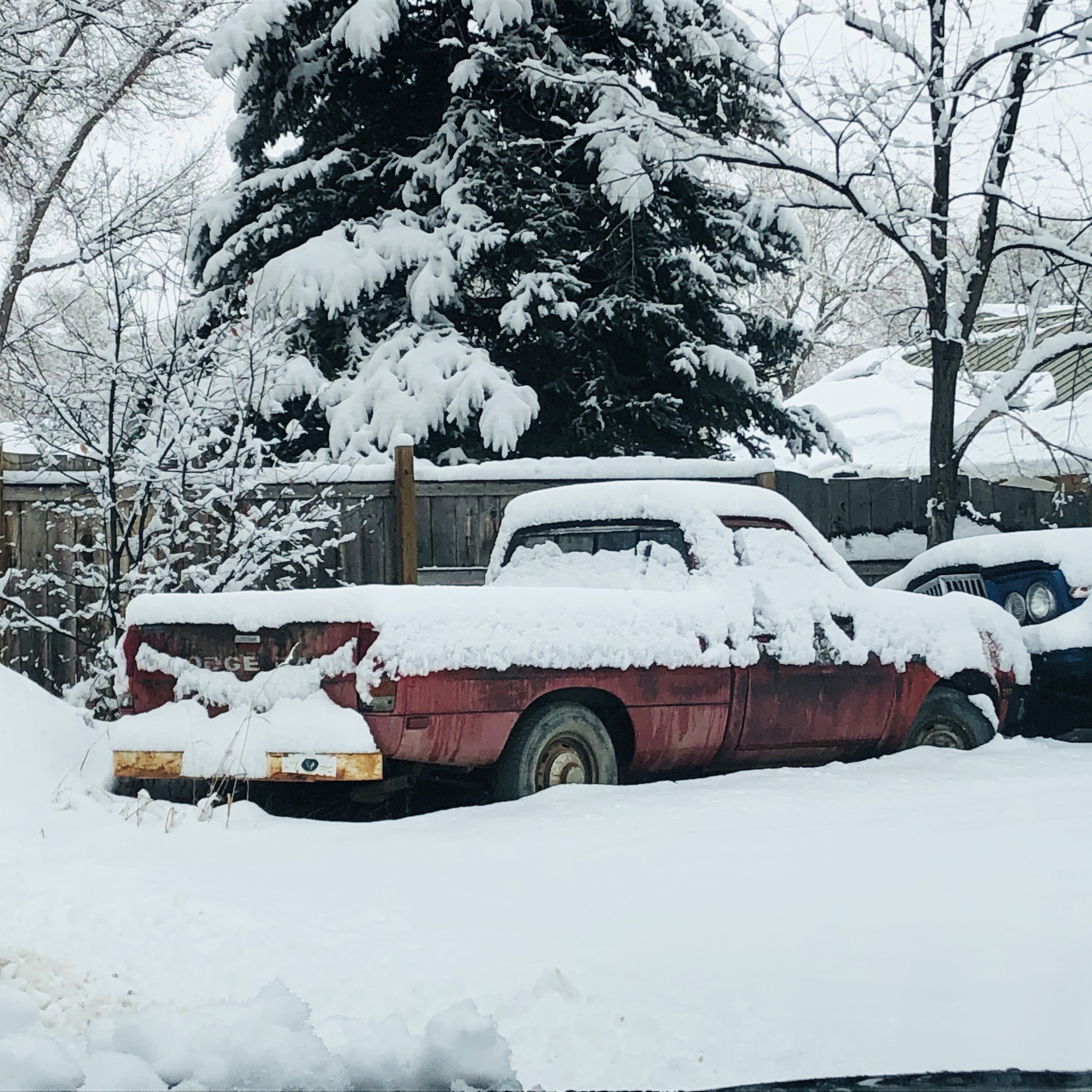 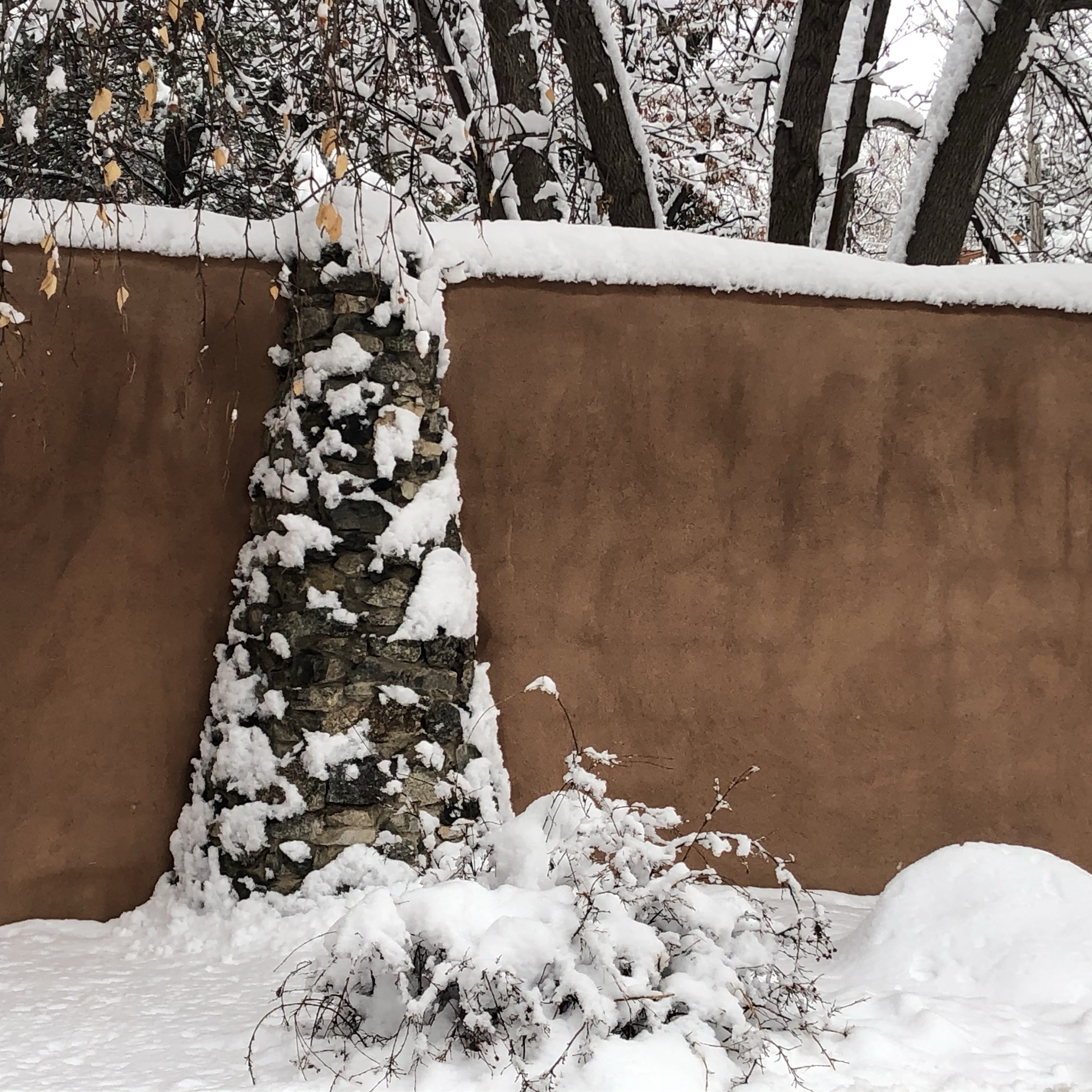 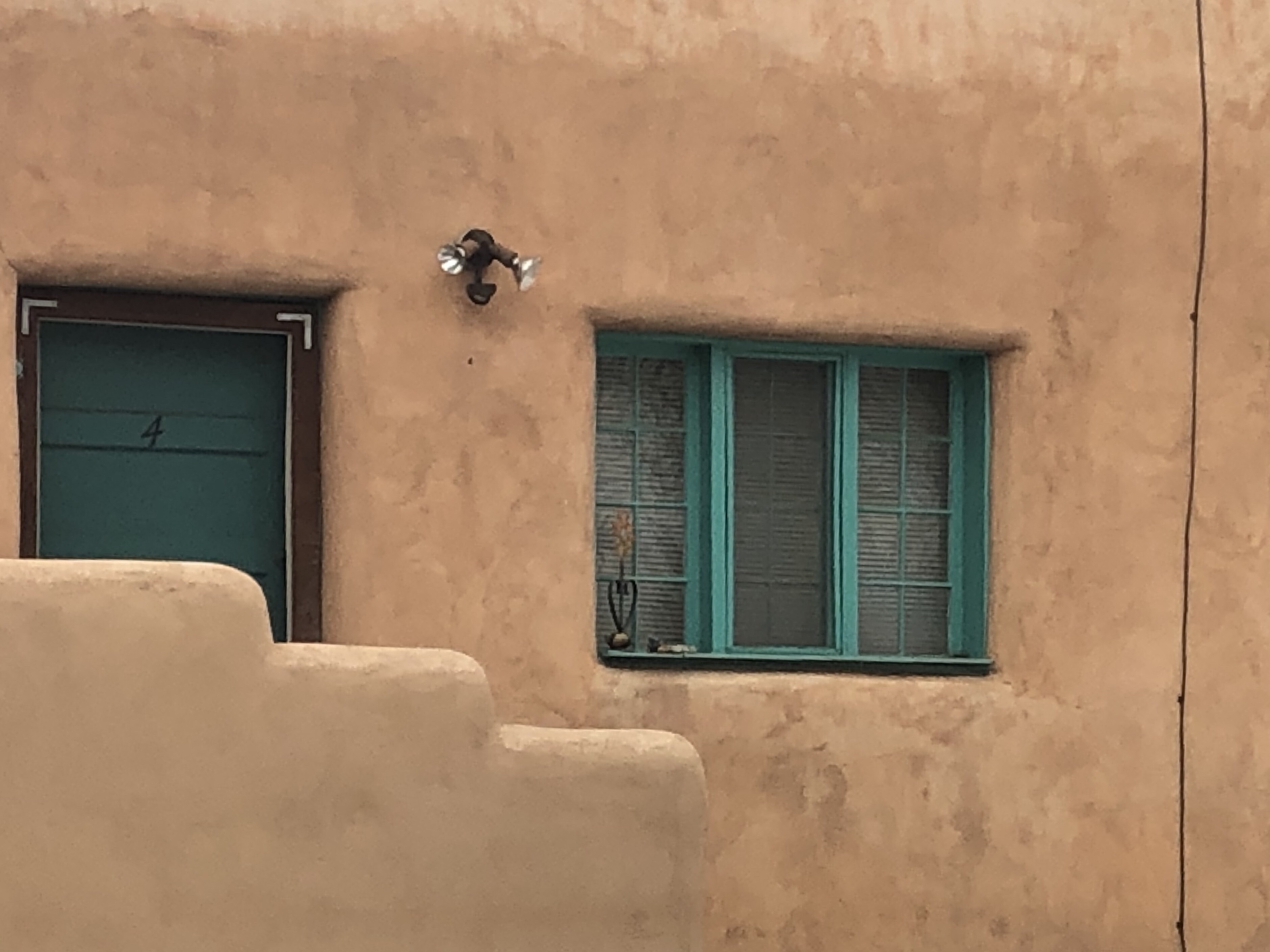 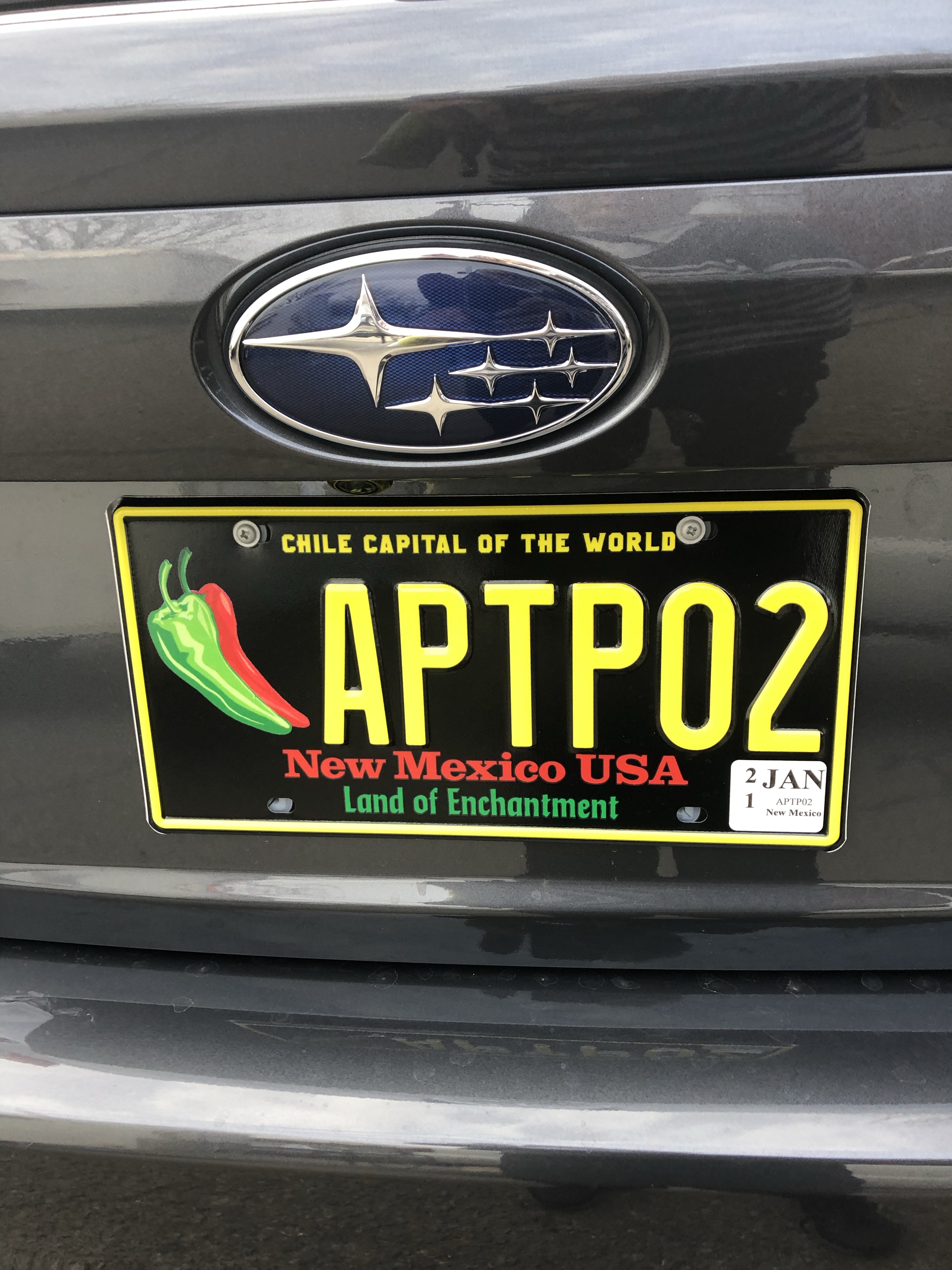 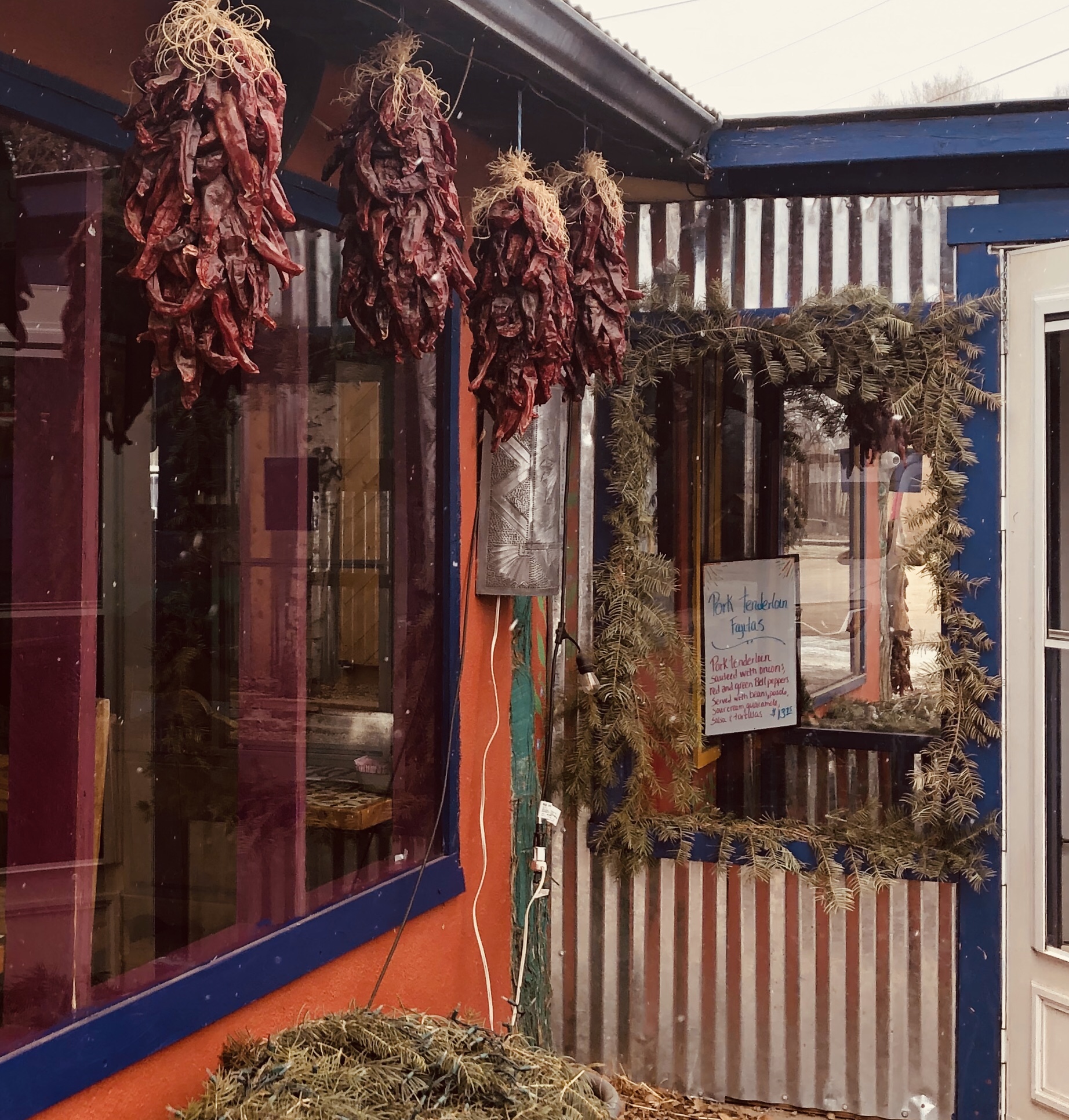 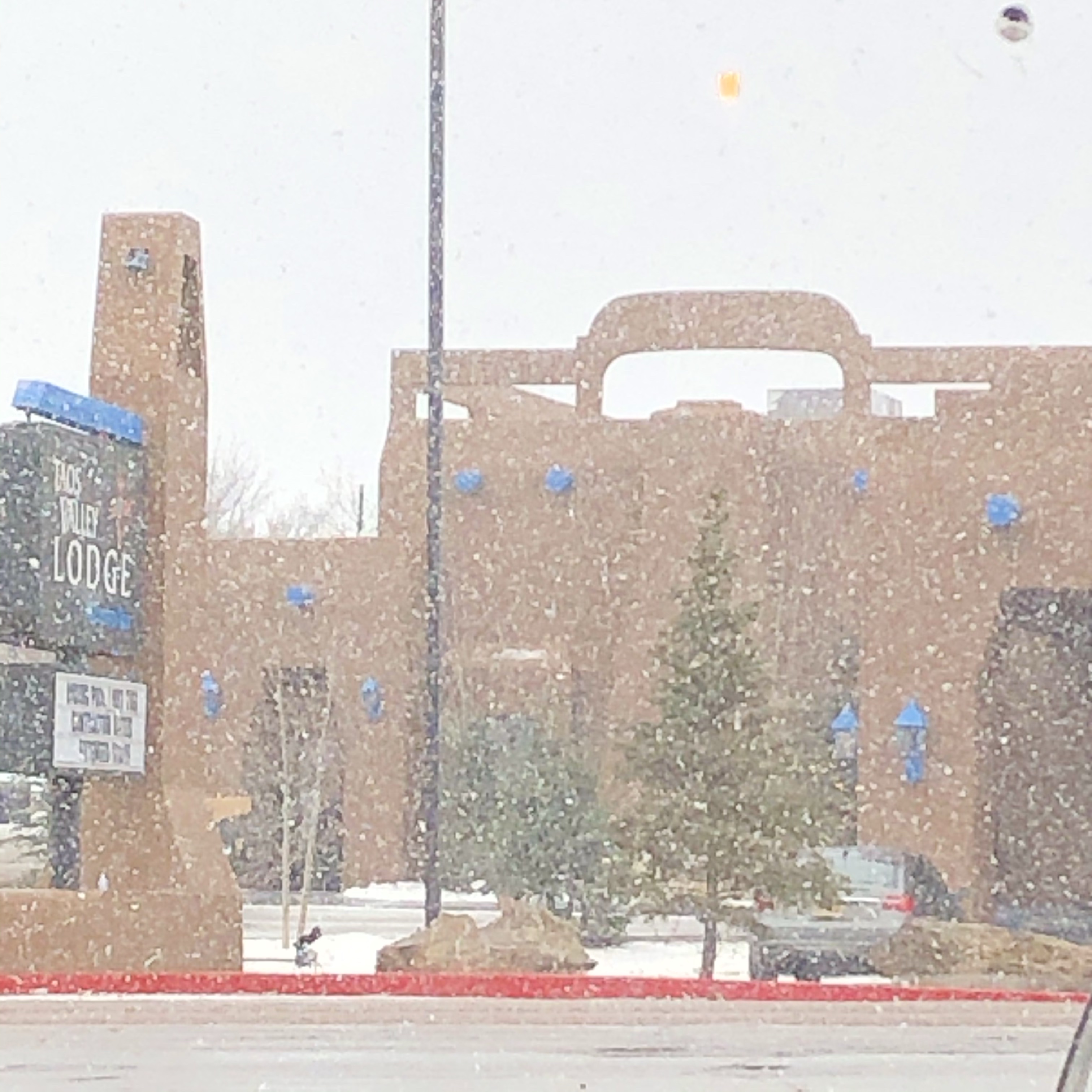 Taos (New Mexico) is “an art colony, a world-class ski resort and a place of convergence – of culture, of opposites, of like minds and new perspectives”, according to visittaos.org.

It’s so true. I’m reminded of a conversation I had a few years ago when we stopped by the Taos Pueblo Farmers Market. It was winter, yet fresh tomatoes and other vegetables were available. That led to a presentation more than a conversation, about the importance of natural resource smarts in this place of traditional scarcity. 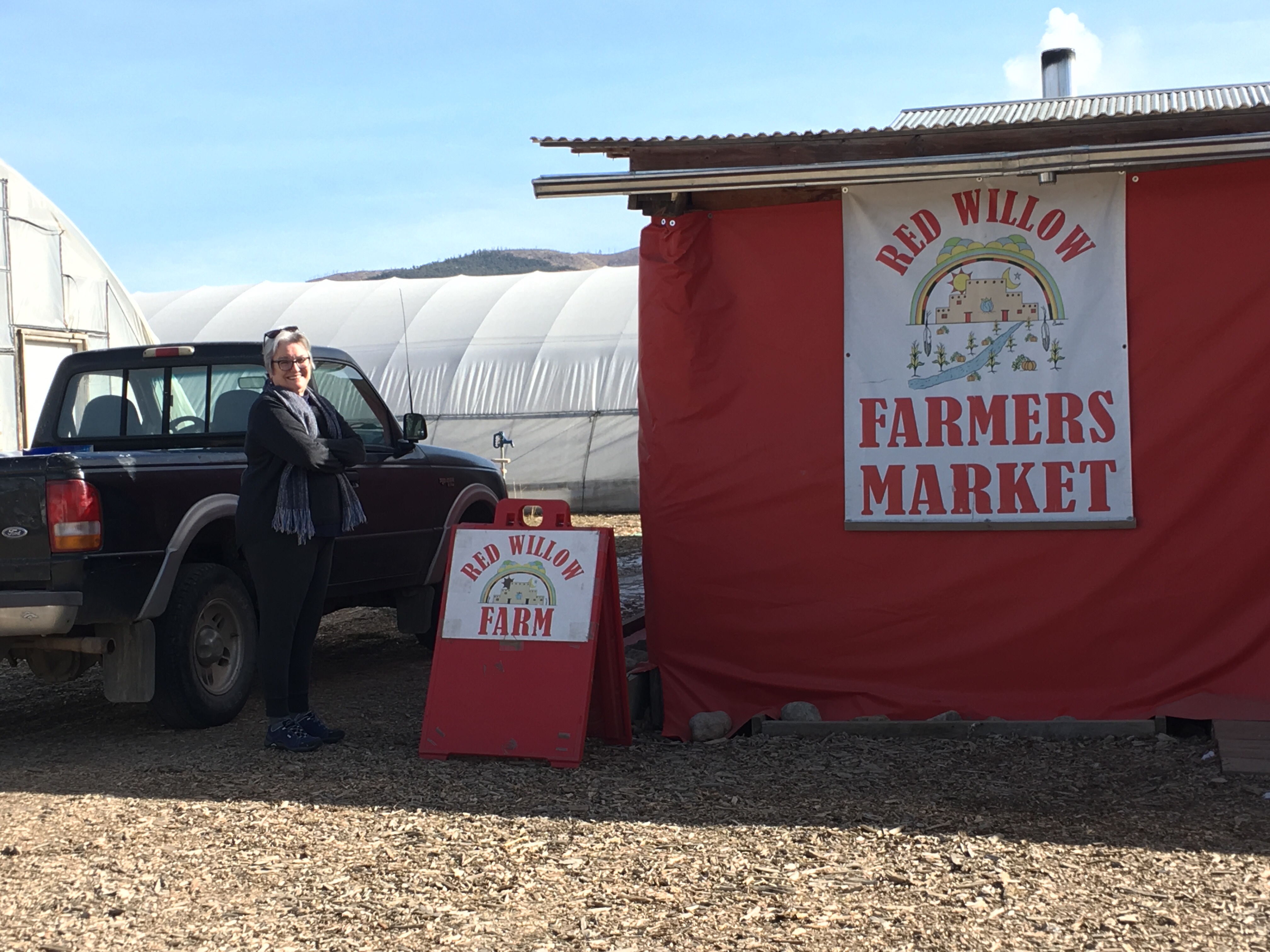 The point was that all three cultures that make up the history and presence in this place – Native American, Spanish, and Anglo – all have lived by the imperative to be prudent in the use of land and water.

This is heritage convergence.

I’ve seen convergence in housing as well. What we would consider traditional (sometimes with a difference in materials – like adobe construction); Earthships, Pueblos found on Native America reservations.

A visit to Taos Pueblo a few years ago was so interesting, even in light of restrictions imposed about where we could walk and if we could take photographs.

I’ve stayed in an Earthship. 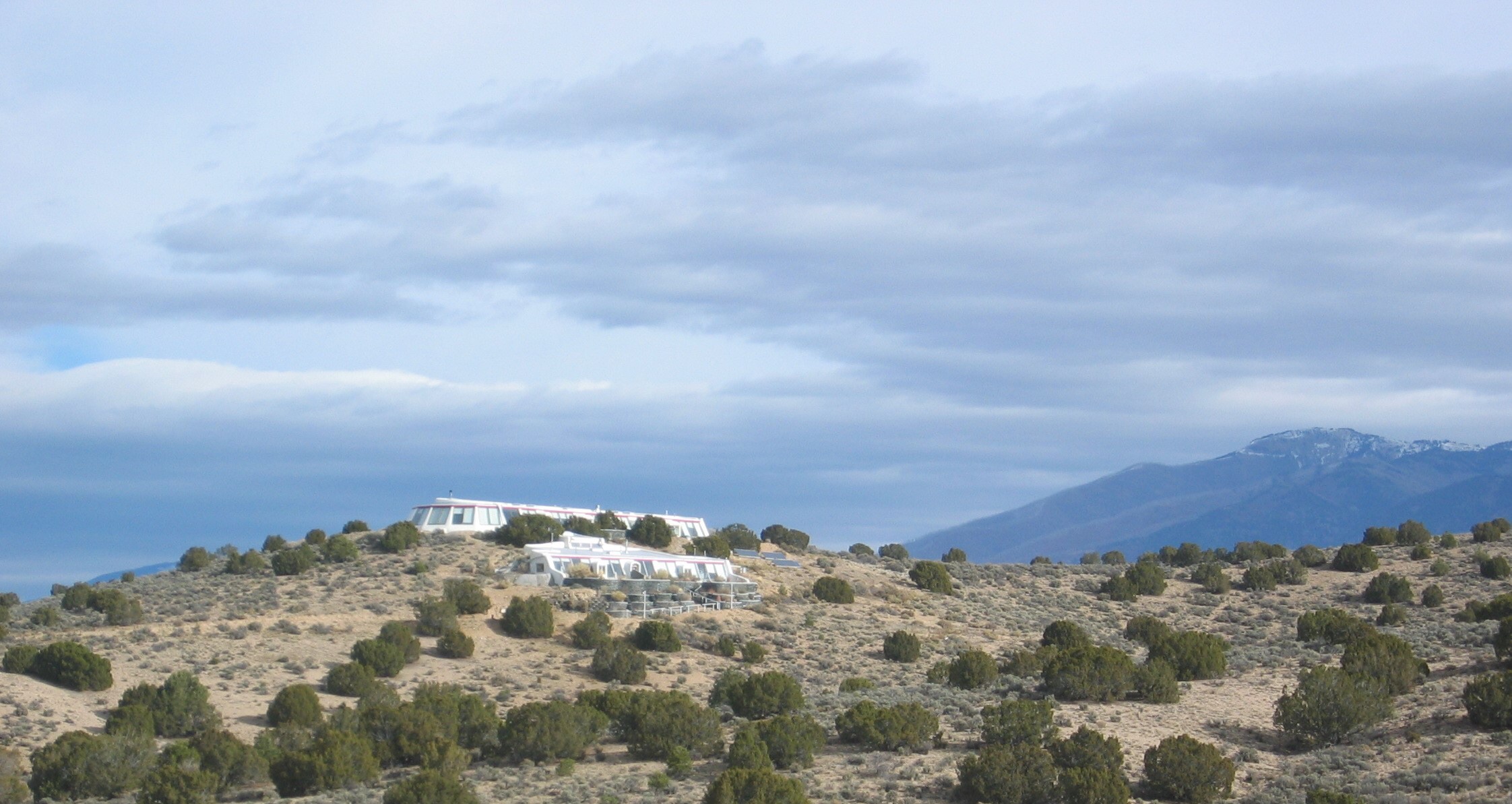 Much of the structure is built underground and power is provided by solar panels. We stayed here for a number of years. In the end it was a bit too much off the grid and one two many times of being unable to leave because of impassable roads due to snow.

We returned to more traditional lodging in an adobe casa, where we’ve stayed for at least a decade.

There’s a convergence of faith traditions. I suppose you’ll find this most anywhere, but it feels personal here.

I experienced what I call a “drum wash” several years ago. It was intense, and I have to say the extreme pain I had somewhere in my body (I can’t recall just where it was), disappeared. Perhaps I should see if I can find the drum woman again.

As my flight descends to Albuquerque, I see convergence of land-marks.

I’m soon to set off to experience this place of convergence.