Retreat is defined as a place of refuge, or seclusion, or to withdraw.

I’ll be doing all of the above in a few days as I journey to Northern New Mexico for my 2nd annual Epiphany retreat.  Beginning in 1995, and continuing for the next twenty years, my best traveling friend and I have spent some part of Advent in New Mexico.

Last year we shifted to retreating during Epiphany in January. A grandboy’s birthday necessitated the shift.  Missing the Advent trip was a sad, sad time last year.  The surprise was realizing the new Epiphany retreat in January was quite possibly better than all the December Advent treks. It’s much quieter in January; you can hear the silence.

Not a fan of change, I would not have thought I’d find the empty Advent days of 2016 transformed into full Epiphany days of 2017.  Now ready for Epiphany 2018, I’m filled with anticipation.  And longing to be on retreat in northern New Mexico once again.

Last year a new coffee spot had opened just a week ahead of our arrival.  We spotted the place as we drove into Taos.  You couldn’t miss it! The Coffee Apothecary. 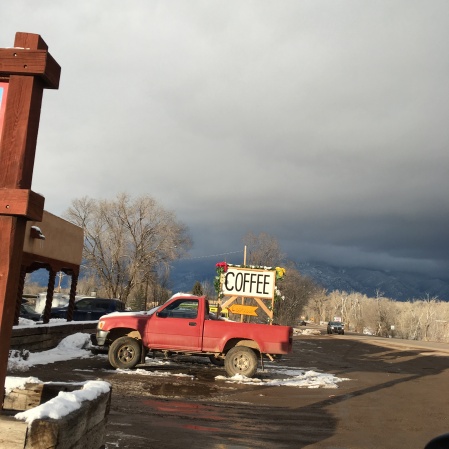 We quickly became regulars, to say the least. We were on a first-name basis–Lydia and Pablo. A wonderful young couple filled with hope and enthusiasm for their new business.  Now a year later, it will be delightful to be in their midst once again.

Along with retreat will be reunion.

In 1983 my sons went to a camp in the Pecos National Forest outside Santa Fe for a month. This was an effort on my part to instill the “mountains” in my sons’ hearts and souls. We were living in Texas, after all, and so it was necessary they travel beyond state lines.  I chose New Mexico because it was a distance I could drive to pick them up after camp.  My heart and soul needed an annual mountain fix. They continued to attend this camp a month each summer for many years- and yes, I am certain mountains took up residence in their hearts and souls.

When it was time to pick up the boys that first camp year, my dear friend Lynn and I drove from Houston to Santa Fe, allowing several days to enjoy the area before it was time to claim the kids and return home.  On that trip we stayed in a B&B in Chimayó, a small village located about 30 miles north of Santa Fe. La Posada de Chimayó was owned and run by a women from Michigan, who upon returning from service in the Peace Corps, migrated to this remote area of New Mexico and opened up a guest house, as she called it.  She was the first woman in New Mexico to open up such a business.

My friendship with Sue grew over the next two decades of lodging with her, until she shuttered the guest house. We have maintained the friendship, meeting for a meal during each Advent -now Epiphany – retreat. We’ll reunite for a meal on the drive up to Taos.

About the time Sue closed her business, I met Abby.  A potter living outside Taos in an Earthship community, we were introduced by the owner of an Earthship B&B where we were now staying during our December trips. The friendship with Abby has flourished and I am gifted more than words can say as we spend time with her during each trip.

Our lodging for the past eight years as been in a small casa in Taos.  Abby introduced us to Georgia, a local artist who rented out this casa, located just behind her home. Sadly  Georgia died three years ago.  On our last stay not long before she died, we hung out with her in her studio, while talking about illness, death, and decisions – and just how to do all of these difficult things.

Happily Georgia’s daughter manages the casa long distance, so once again we will have our little place just off the Taos plaza where we will relax, rest, and invite Abby for dinner.

There is an additional reunion for me during this Epiphany retreat.  During my adolescent years, I was best friends with a girl who lived just down the street.  We both played the piano and during the summers we competed in talent shows that took place in local neighborhood parks. Our “signature” style was playing duets looking at each other, not the music. We did a good bit of growing up together during those years. We stayed friends for many years, actually living near each other once again in northern California during our early married lives.  Then we lost touch.  Now recently back in touch, and given that she lives in Albuquerque, we shall meet for lunch as I await Beth’s evening arrival.

Delicious is how I describe all the meal reunions I’m anticipating.