My most intentional Lenten discipline was to make crosses. I used found objects, most of which were natural materials. As I journeyed through Lent I found I was always watching for objects to use in my cross-making, and I found, too, that I looked forward to the times when I would “slip into” my crafting time with God. It was a good thing.

Here are most of them.

One of the suggestions of what to do with the crosses was made by the author of the book that served as my inspiration to enter into this Lenten practice.  One suggestion was to bury the crosses. I was really attracted to that idea, especially when an image was painted for me of burial and resurrection. The crosses would be buried, yes, but there was the possibility that some of the seed pods I had used to adorn the crosses might actually sprout. 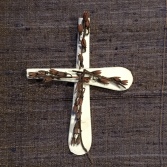 Thinking about an upcoming visit from a grandson, I thought he might help me bury the crosses.  After he arrived, and I explained what I was thinking, he suggested that we place the crosses “in” some of the foliage surrounding my home. That way the crosses would still return to the earth, but it would be possible to see them for as long as they remained in or on the branches and leaves, with always the possibility of seeds being dispersed.

Today we set out to return the crosses.

Just beyond the swing is a bank of rhododendrons. You’ll see – sort of – the crosses scattered there.

From the woods, mostly; now returned. 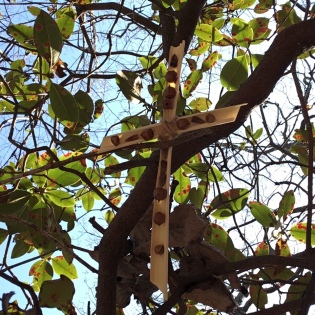 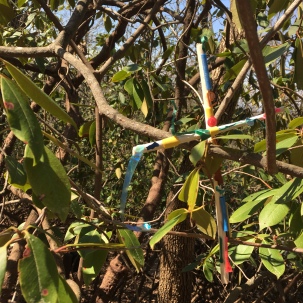