This turned out to be an anything-can-happen day. Also a u-turn day.

First stop was Coffee Apothecary for cuppas and to say goodbye to our friends Lydia and Pablo. We were gifted with fresh-roasted coffee beans as we departed. Their business has taken off and it was so good to see their hard work pay off.

Originally we had planned to drive to the wildlife refuge, Bosque de Apache. It’s 90 miles south of Albuquerque, our destination for the night.

As we drove south from Taos, we passed the Rio Grange Gorge Visitor Center. We immediately noticed the American flag was flying – which meant the federal employees at this location had returned to work. A quick u-turn to the center so we could walk in and welcome them back! They were delighted with our gesture. We had some good conversation too.

It was at this point we decided to skip Bosque de Apache, and take the road from the center along the Rio Grande River west. It’s a favorite drive of mine, and the drive was beautiful.

At the bridge we net a young woman walking nearby. She was from California and had traveled to the area to celebrate her birthday. She was delightful. She asked if the road continued to the highway – it does. She then mentioned she was headed to a local winery. Vivac.

We parted ways, returned to the highway and headed south. Some 15 miles later we passed Vivac Winery. We decided it would be fun to pay it forward and buy a bottle of wine for her. We made a u-turn back to the winery. 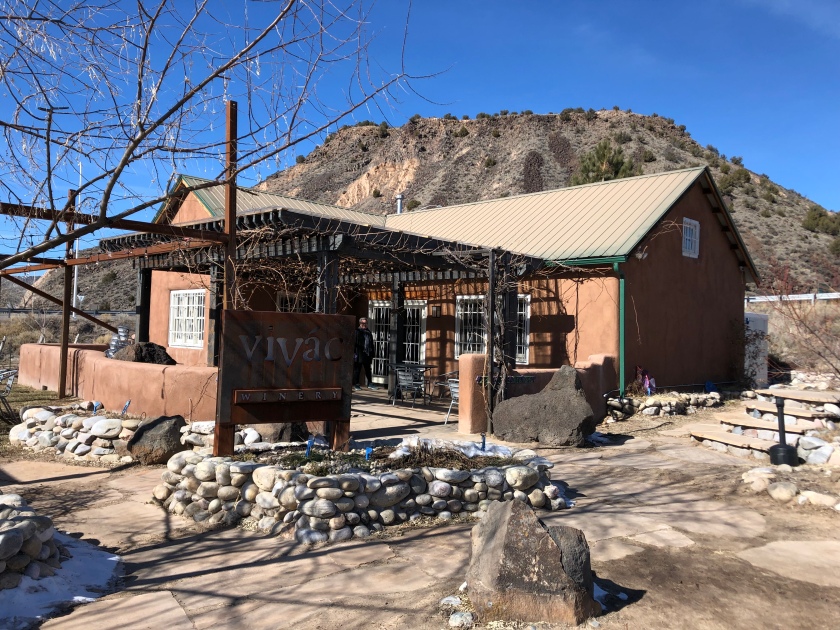 The woman tending the business was delighted with our plan. We made arrangements, left a note, and continued south.

Awhile later we decided we should detour to Abiquiu, home of Georgia O’Keeffe. One of my most favorite places is just north of Abiquiu. Off we went.

That’s her home. You can see it from the highway if you know where to look.

Returning to our road south, we decided to take a more scenic route to Albuquerque than the way ahead, so we u-turned to Los Alamos, Jemez Springs, and Bernillilo. We were treated to high mountain vistas beyond description.

We continued on through Jemez Springs.

Then to Bernillilo for dinner at The Range.

A simply amazing day made more amazing because of u-turns.