I had a crisis of faith in the mid 70’s.  Events beyond my control tossed me around, and tossed me out of relationship with God. I left church, taking my family with me. And I left God.

A few years later my family returned to church because I wanted my sons to have the experience of Christian education and community as part of their life formation. I was purposely silent during the spoken or sung words during the service. It was a crisis of faith, no doubt about it.

My sons were nourished and fed in their faith at St. Dunstan’s Episcopal Church.  They both were active in the acolyte core, described as “second to none”. I am so grateful for their exposure to faith in this community. As they grew up and began their lives apart from home, I left the church once again.

A tradition at St. Dunstan’s was for those students who had graduated from high school and gone off to college, to return to serve as acolytes on College Sunday (the Sunday following Christmas). My younger son was home from college his freshman year and would be serving as an acolyte. I had heard St. Dunstan’s had called a woman priest to serve as assistant to the  rector. I wanted to be with my son that Sunday, and I also wanted to experience this new reality of women leading liturgy.

I returned to church that Sunday.

I also began my journey back to God.

Following the service, I spoke with The Reverend Beth Fain.  I remember the conversation as clearly as if it was yesterday. I told her how I had been away from church and from God, and that I would like to talk with her about this loss. She said I could schedule an appointment with her in a few days, after she went to visit her mom.  Then she said, “Let’s see what God has in store for you.”

And so my journey to return to God began.

Along the way I’ve had company.

In the form of a Cursillo Reunion group. This group met weekly to share our faith journey during the previous week. The purpose of our breakfast meeting was to share with each other our growing in faith that was taking place within;

in the form of finding a weekly Wednesday noon Eucharist in the chapel at St. Luke’s Episcopal Hospital, just across the street from my office in the Texas Medical Center. I met and became friends with the Chaplain, The Reverend Helen Appleburg. My weekly worship with Helen+ fed my soul and helped sow seeds for my journey of  yearning for, and finding God;

in the form of study and conversation with The Reverend Barbara Taylor, who was at that time the rector of a small Episcopal church in North Georgia. She helped give me the courage to trust in my journey to come;

through my service in the Episcopal Diocese of Atlanta, with the ministries I joined, and even led. – whose missions are to serve the least among us- those whom Jesus says we are to give care;

through my service in my home parish, Saint James, Clayton, GA. And with the renewed urge to learn about church history and scripture, all because of the presence of my rectory, The Reverend Mary Demmler;

and more than anything, through the spiritual direction with Rev Beth that I began in January 1993 and which continues to this day. 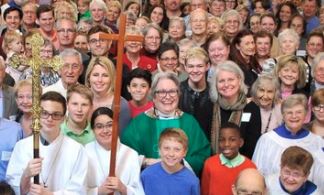 This 25 year journey to God has brought me to a place of continued soul seeking and finding. This day, as I join 500 other delegates for my diocese’s Annual Council, I think about all the things I’ve done for God that I wouldn’t have done had I not taken that first step to introduce myself and ask for direction.

I have been tethered in my faith-seeking by these women. And by so many others with whom I have shared paths of service and companionship as I have sought and found.

Thanks be to God.

One thought on “the return road to faith”